The true cost of cancer is greater than many people realize and can affect much more than your wallet.

From expensive treatments to lost wages and beyond, the cost of cancer can be financially devastating for many patients, and the contributing factors aren’t always obvious.

The costs of cancer run well beyond treating the disease.

One not-so-hidden cost is the loss of life.

A new study published in the journal JAMA Oncology found that cancer took 8.7 million years of life in 2015 in the United States, where it’s the second leading cause of death.

The American Cancer Society (ACS) estimates that cancer will cause more than 606,880 deaths in 2019.

Lung cancer resulted in the most lost earnings, followed by colorectal, female breast, and pancreatic cancers.

Among people aged 16 to 39, lost earnings were highest for leukemia. For people over age 40, lung cancer was highest.

Some people can continue to work full time during treatment. But some types and stages of cancer require time off work for treatment and recovery.

A previous study on employment and income losses among cancer survivors used data from 1990 through 2009. The researchers found that work hours declined by up to 200 hours in the first year after diagnosis, and the likelihood of a person with cancer being employed dropped by almost 10 percentage points.

That means less money coming in as expenses grow. Losing your job can also put your health insurance at risk. 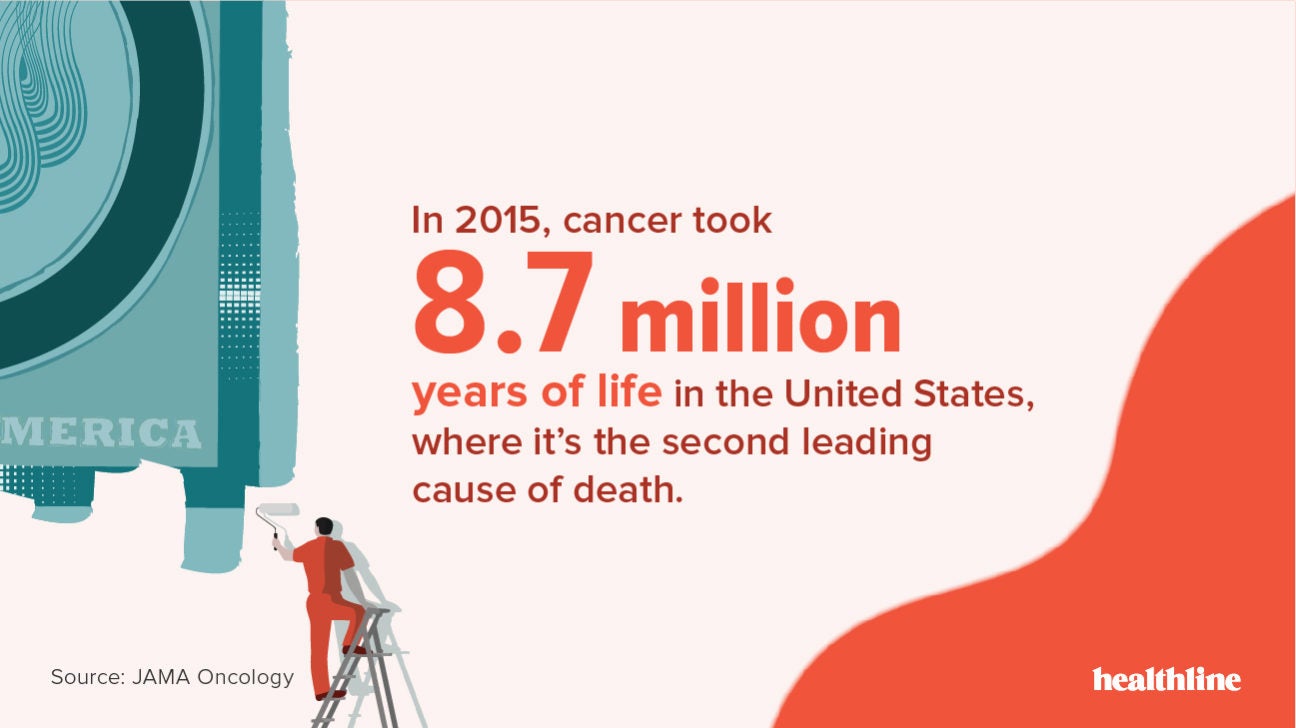 Karen Selby, a registered nurse at The Mesothelioma Center, told Healthline that the actual cost of certain treatments is very high.

Patients with cancer are left with co-pays and coinsurance based on those costs. That’s in addition to insurance premiums and deductibles.

“Appointments with out-of-network specialists can be quite costly depending on a patient’s insurance plan,” said Selby.

“This is especially prevalent for those dealing with a rare cancer, as a patient will often have to consider a physician outside of their insurance network in order to find a specialist for their specific diagnosis,” she continued.

Selby noted other treatment-related expenses, such as needing an ambulance or going to the emergency room.

According to the ACS, a cancer diagnosis can lead to fear, anxiety, and depression, feelings that can affect patients, families, and caregivers.

Jennifer (who asked that her last name not be used) is a 24-year-old cancer survivor living in New York City. She was seemingly healthy and had no family history of cancer when she was diagnosed with leukemia last year.

“Obviously, I was very traumatized because I had my whole life ahead of me,” she told Healthline.

“When the oncologist gave me the news, I didn’t know how to comprehend it. I was rushed into treatment without a mental health expert or specialist to calm me down. Oncologists and nurses do everything they can to keep you alive. They deserve a lot of credit, but they’re not mental health experts,” she said.

In the hospital, Jennifer’s friends and family visited often. But she noticed other patients who couldn’t say the same.

“I was surrounded by people in their 60s and 70s, pretty much the age range for a lot of cancer patients. I would see them looking so lonely and needing someone there,” she said.

She considers herself fortunate that her specific type of leukemia has a good prognosis and good cure rate, but she found it mentally exhausting.

“You have negative emotions and anxious thoughts about cancer coming back. I was a young person, but there were lots of things I couldn’t do, which made me feel isolated. It’s hard. I did see a couple of great therapists for a few months. It helped a lot, but I couldn’t afford it in the long run,” said Jennifer.

While she appreciates that some cancer survivors do well in support groups, it’s not something Jennifer wanted to do.

“I think policy makers, lawmakers, and people in the medical industry need to understand that mental health is a huge issue in the cancer community,” she said.

Even so, you may be responsible for many out-of-pocket costs.

Dana L. Dornsife is founder and board chair of Lazarex Cancer Foundation, an organization that provides reimbursement for patients with cancer enrolled in clinical trials.

“Typically, clinical trials are not in a patient’s backyard,” Dornsife told Healthline.

“Fifty-six percent of patients have to leave their local treatment center to seek treatment in clinical trials. Patients want to maximize their potential outcome in a clinical trial, so if a breast cancer patient happens to live in Seattle, there might be a trial an hour from home, but that might not be the best trial for her. That patient may end up having to go to Texas,” she explained.

Though the trial itself may be free of charge, the travel costs are not. That would include gas, airfare, taxi, Uber, bus, hotel, etc.

“Patients have to cover those expenses at a time when they’re already financially devastated from fighting their disease. It really becomes a serious barrier for patients to be able to take advantage of a medical breakthrough. Every trial is different. It may take going twice a month or sometimes once a week, sometimes for multiple days. That adds expenses like childcare and time off work,” said Dornsife.

“When you have advanced cancer, you’re not necessarily firing on all cylinders and maybe you’re not able to travel by yourself, so you need a travel companion as well,” she continued.

It’s not just the big-ticket items either.

“If you’re from a household living paycheck to paycheck and barely making ends meet, even the cost of gas, tools, and parking can be a barrier,” said Dornsife.

For some families, that means deciding whether to put food on the table or participate in a clinical trial.

“That’s why Lazarex exists,” said Dornsife. “We help navigate people through clinical trial options to identify the best opportunity for them. If they’re accepted in a trial, choose to participate, and need final assistance, we will provide assistance on a sliding scale to cover out of pocket expenses.”

Lazarex assists patients all across the United States, as well as patients who come from other countries.

“The vast majority of legislators at the state and federal level are not aware of this barrier,” said Dornsife. 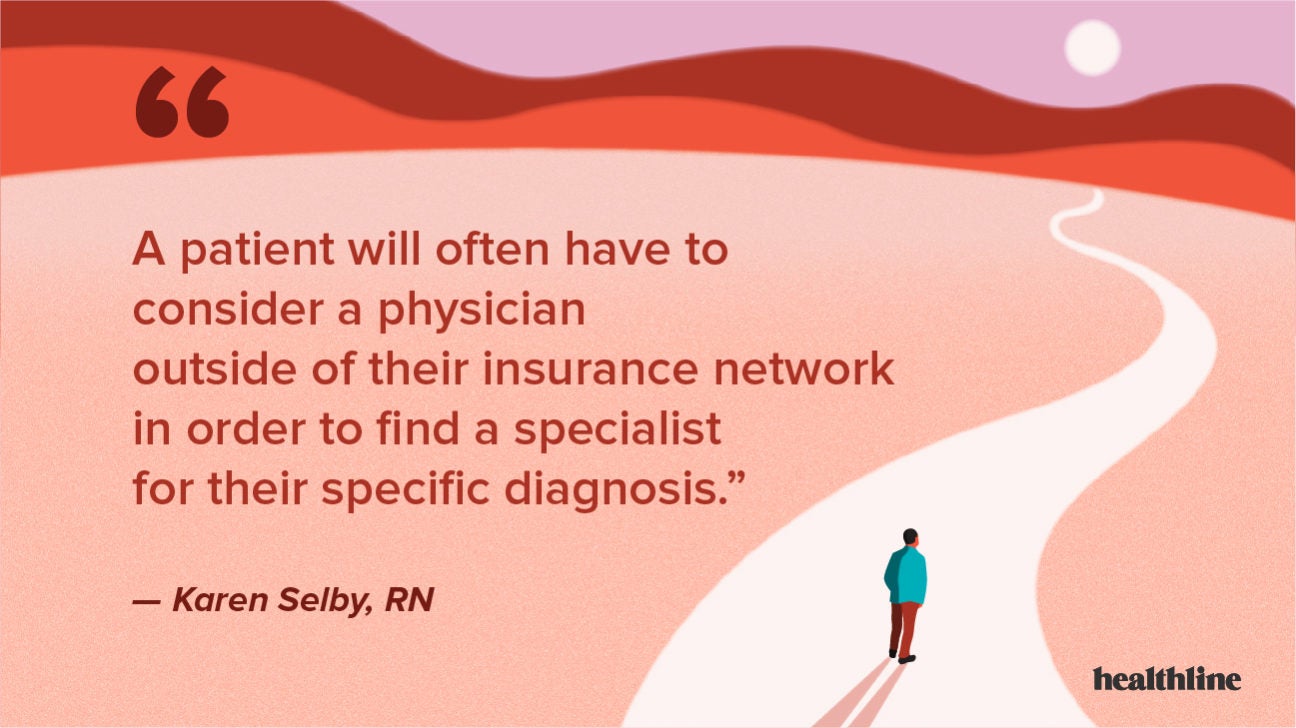 “The added cost of travel expenses, such as gas, wear and tear on a vehicle, and auto maintenance grow anytime you’re having to drive to and from doctor’s offices, chemotherapy treatments, radiation appointments, or any other treatments,” said Selby.

“In addition to physician-prescribed treatments, patients may look to improve their nutrition intake through, for example, juicing and supplements, which can increase costs,” she added.

Other hidden expenses, such as housekeeping or lawn maintenance, can occur when patients are unable to perform their usual activities, said Selby.

Susan Brown is senior director of education and patient support at Susan G. Komen. Among other hidden costs of cancer, she lists wigs, prosthetics, medical equipment, lymphedema supplies, and compression sleeves, some of which may not be covered by insurance.

Brown told Healthline that patients may need legal help for matters such as drawing up a will or naming a power of attorney.

“One of the costs that families often overlook is the cost of the funeral if the cancer patient doesn’t make it,” said Alison Johnston, CEO and co-founder of Ever Loved, a funeral planning website.

“Families are faced with an average funeral cost of $9,000, which they often need to come up with very quickly. We find that about 40 percent of our families struggle to come up with the money,” she told Healthline.

Unfortunately, said Johnston, by the time someone has cancer, it could be too late to get affordable funeral insurance or have the money to prepay a funeral.

Planning a funeral can be difficult when you’re grieving, so Johnston recommends researching low-cost options, including cremation, in advance. She also noted that universities and other organizations may cover transportation and cremation costs for donated bodies.

You can also set up a memorial fundraiser.

“More and more people are turning to crowdfunding to help with funeral costs,” said Johnston.

Planning for costs of cancer

Preparation is everything, said Selby.

“Look at your typical monthly expenses and compare that with your current income. How much flexibility do you have? How much can you put toward upcoming medical costs? Calculate how much paid time off you have to help estimate how long you can expect that income stream to last,” she said.

Patients and families can also speak with financial advisors, social workers, or patient advocates, who can help point you toward assistance programs, said Selby.

It’s also a good idea to talk to your doctor about your financial situation.

“They may be able to help find less expensive treatment options or maybe a clinical trial,” said Selby.

In addition to those resources, Brown suggests consulting with your health insurer and the human resources department at your place of work. Susan G. Komen also offers information about resources to help with financial issues.

You can find more financial resources through the American Cancer Society.

Coronavirus (COVID-19) Resources for Those Affected by Cancer